All the PARTS, All the Time!

Thank you for visiting the Tropical Marine Air Conditioning, Inc. web site. Please use the contact info below. 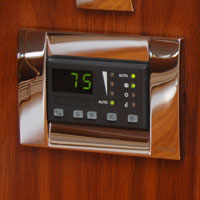 For precise control and monitoring of cabin temperature and humidity levels, Marine Air offers a number of modern, wall-mountable controls. From electromechanical to microprocessor platforms, Marine Air has the right control for your vessel.

The Elite II control system represents the most intelligent and sophisticated control over cabin climates. The Elite II is available with an optional CAN-bus network adapter which connects to several popular helm and cabin touchscreen control systems.

Complete the look of your cabin controls with a wide selection of stylish bezels, designed to compliment the decor.

Easy to use with raised buttons and scroll button for mode selection. Cool-only, heat-only, dehumidify and automatic mode. Automatic humidity control reduces moisture when the boat is unattended.

Take control of your comfort

The easy to use Dometic MCS-DISPL with raised buttons and scroll button for mode selection. Cool-only, heat-only, dehumidify and automatic mode. Automatic humidity control reduces moisture when the boat is unattended. 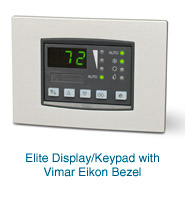 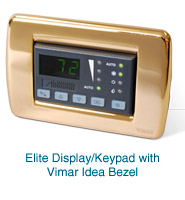 The control can also be used with chilled water air handlers and is called AH-Elite in that application.

The Elite control has a sleek, modern Euro design, featuring raised buttons for easy access and control. Decorative snap-on Vimar® bezels are available in a variety of colors, styles, and materials to match your vessel's interior.

The Elite display operates with the new Passport® I/O circuit board, which uses state-of-the-art SMT technology. 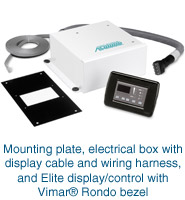 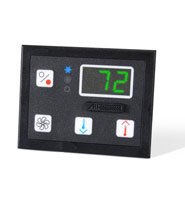 
The Passport I/O Environmental Control is a microprocessor-based controller, designed for the precise monitoring of direct expansion and chilled water air conditioning systems in marine environments.

The control is dual voltage, operating at both 115 and 230 Volts, 50/60 Hz. The display is available in both black and white. 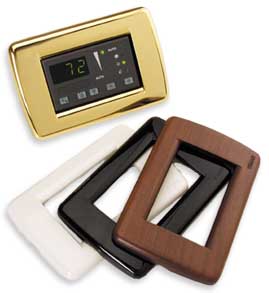 ELITETM Environmental Control
State-of-The-Art-Technology!
The Elite has a sleek, modern Euro design and is a decorator's dream come true!

The control snaps easily into decorative Vimar® bezels, which are available (separately) in dozens of colors and materials including wood, metal and thermoplastic. The Elite has all of the features and benefits of the old Passport® II, and more. The control works with the new Passport I/O circuit board, which utilizes state-of-the-art SMT technology.

Programming the control is easy, thanks to the addition of one-touch key modes and scrolling buttons. This new control is "Flash Programmable", which allows for easy software upgrades in the future. It also features the new "Pump Sentry" seawater sensor option designed to better monitor pump operation.

Elite Retrofit Kits are available for upgrading either Passport II or mechanically controlled units in the field.

Features of the Passport I/O include: an electric heat relay so electric heat is now a convenient option with DX units; and a new programmable parameter allowing the seawater pump to be set for continuous operation, or to cycle with the compressor. The I/O circuit board has an additional air sensor connection, so the customer can now use the remote air sensor in the cabin and still monitor outside air temperature.

Mechanical Controls
Mechanical controls are also available for use with the DX product line and are a reliable low cost option. The controls come in either horizontal or vertical configurations.

The CWMC is the brain that controls the individual Digital Diagnostic Controllers, (DDC), on a multi-staged chiller. It manages all cooling and heating functions for each chiller stage, as well as operation of the seawater and chilled water pumps. It optimizes compressor operation by automatically changing the lead compressor to evenly distribute run time. The CWMC monitors chiller operating status as well as all safety protection systems.

DDCs can and do stand-alone as a single stage or multi-staged chiller controls. The addition of Pump Relay Panels (PRP) and remote DDC switches are necessary when not using the CWMC.

System redundancy and easy field repair were the priorities when the TWLC was developed. Each chiller in a TWLC system has a dedicated power/logic board, and the boards are networked together to form an integrated system (automatically controlling up to 6 chillers). This design means that a single board or network failure will not shut down the entire system. The P/L board has board-mounted LEDs to help with troubleshooting, replaceable EPROM for software upgrades, and plug-in terminal strips and RJ-12 jacks which allow for quick field installation.

AH-Elite & AH-Passport I/O Environmental Controls for Air Handlers
The Elite and Passport I/O controls described above are also available for Chilled Water air handlers, and are designated by the "AH" at the beginning of the name.

The AH-Elite is, by far, the choice of mega-yacht designers everywhere.
Just like the Elite for DX Systems, the AH-Elite fits into Vimar type bezels used in most mega-yachts today, and are also available in a rainbow of colors.

AH-Passport I/O and AH-Elite Retrofit Kits are available for upgrading either AH-Passport II or mechanically controlled units in the field.

Mechanical Controls
Mechanical controls are also available for use with the CW product line and are a reliable low cost option.

Other Chilled Water Controls
Staged, Modular, and Compact Chillers (SCW, MCW, and CHC) have their own set of digital chiller controls.

Thank you for your interest in Tropical Marine Air Conditioning!

All the Parts, All the Time!